Daniel Ryser, (2013) Assange's Room, [1:1 Installation] FACT, Liverpool.
HOW MUCH OF THIS IS FICTION. Presents an exhibition of politically inspired media art employing détournement at every turn, hacking the reality to present urgent post-truth politics.
With Guy Debord’s text The Society of the Spectacle in mind it seems possible to interpret the current state of the media and politics in relation to the Spectacle:

8
The spectacle cannot be set in abstract opposition to concrete social activity, for the dichotomy between reality and image will survive on either side of any such distinction. Thus the spectacle, though it turns reality on its head, is itself a product of real activity. Likewise, lived reality suffers the material assaults of the spectacle's mechanisms of contemplation, incorporating the spectacular order and lending that order positive support. Each side therefore has its share of objective reality. And every concept, as it takes its place on one side or the other, has no foundation apart from its transformation into its opposite: reality erupts within the spectacle, and the spectacle is real. This reciprocal alienation is the essence and underpinning of society as it exists.
(Debord, 1994, p.5)

The first visible consequences of a widespread use of détournement, apart from its intrinsic propaganda powers, will be the revival of a multitude of bad books, and thus the extensive (unintended) participation of their unknown authors; an increasingly extensive transformation of phrases or plastic works that happen to be in fashion; and above all an ease of production far surpassing in quantity, variety and quality the automatic writing that has bored us for so long.
Détournement not only leads to the discovery of new aspects of talent; in addition, clashing head-on with all social and legal conventions, it cannot fail to be a powerful cultural weapon in the service of a real class struggle. The cheapness of its products is the heavy artillery that breaks through all the Chinese walls of understanding. It is a real means of proletarian artistic education, the first step toward a literary communism.
Debord defines détournement in three stages:
Minor détournement is the détournement of an element which has no importance in itself and which thus draws all its meaning from the new context in which it has been placed. For example, a press clipping, a neutral phrase, a commonplace photograph.
Deceptive détournement, also termed premonitory-proposition détournement, is in contrast the détournement of an intrinsically significant element, which derives a different scope from the new context.
Extensive detourned works will thus usually be composed of one or more series of deceptive and minor détournements.

As the spectator moves around the exhibition space of FACT these levels of detournement are explored at different rates in different works. The spectator is virtually détourned or hi-jacked as artist Adam Harvey in the digital work Skylift (VO.2) uses a geolocation spoofing device to virtually relocate the spectator’s smart phone to the location of Assange’s residence at the Ecuadorian Embassy.
It could be perceived that the spectator is then physically détourned when in front of Assange’s Room a 1:1 reproduction of Assange’s office at the Ecuadourian embassy, it is from my perspective detourned rather than just merely produced due to one key element, the room is meticulously constructed entirely from memory. This is due to no photography being allowed in the embassy, so after several visits artist Daniel Ryder has hijacked reality to take the embassy from its original location and into the location of the gallery space. We trust Ryder’s work to be an accurate representation of Assange’s room however ultimately the work is a minor détournement, we without Assange’s presence in the Embassy have little interest in the actual embassy or this 1:1 installation.
Both Ryder and Harvey act as despots, they try to relocate us or deteritorialise us – we are displaced from our actual location of the gallery and are taken virtually and physically the Ecuadorian Embassy. This diaspora reterritorializes us into the forced displacement of Assange. We are all detourned. For the Situationists[1] detournement was like a game, humans being its player to ignite the world into gamespace. This gamespace is referred to by academic Sher Duff:

“The globalisation of gamespace by a runaway capitalism exudes a comparison to the societal paradigms of discipline and control advanced by Foucault and Deleuze respectively.”
(Duff, 2006, p.3)

Through globalisation our gamespace has become what theorist Marshall McLuhan refers to as the Global Village (1962).  Although restricted to the Ecuadorian embassy’s walls Assange takes full advantage of our Global Village and harnesses our gamespace aka the media to detourn sensitive or confidential documents through Wikileaks to liberate them from their capitalist confines. 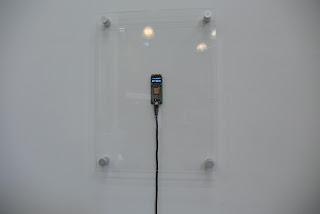 We all need to become the aimless wanderer at some point in our lives, we all need to be liberated from our systematic lifestyles and addiction to our smartphones which drip feed us detourned information from media conglomerates, we trust the devil we trust the machine – we must liberate the derive from the urban praxis it exists in according to the Situationists and allow ourselves to drift further, go beyond the walls of the city and escape to breathe in the landscape of the enlightenment to return to a pastoral golden age. We trust the city and its machine, it’s time to take a chance on nature and allow ourselves to get truly lost in order to discover who we really are.

Bibliography:
Duff, S. (2006) From Psychogeography to Cybertoplogy: Situating “Place” in the Disorientated Dérive http://www.academia.edu/3596185/From_Psychogeography_to_Cybertopology_Situating_Place_in_the_Disoriented_Dérive
McLuhan, M. (1962) The Gutenberg Galaxy: The Making of Typographic Man. University of Toronto Press: Canada.
[1] Revolutionary alliance of European avant-garde artists, writers and poets formed at a conference in Italy in 1957 (as Internationale Situationiste or IS). The IS developed a critique of capitalism based on a mixture of Marxism and surrealism. http://www.tate.org.uk/art/art-terms/s/situationist-international Accessed: May 21, 2017