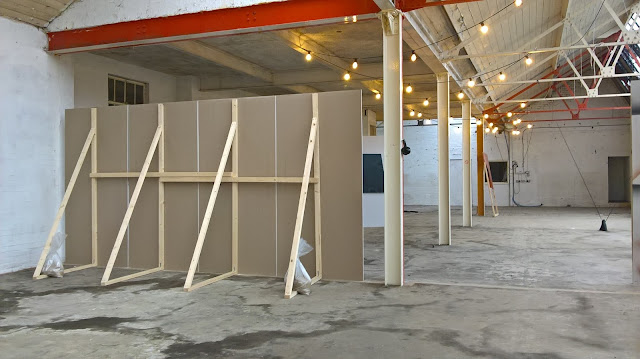 Set in an old shoe factory the exhibition RESIST, RESIST, RELEASE has a history of its own already bounding forward with the presence of previous industry still hinted at with the raw architecture of the space.
Entirely made up of new works there is a site-specificity to the works but also to the process. The exhibition seems to be a complete act of research, both research as practice and practice as research working in sync developing the concept of researchers Grays and Malins refer to as “Dynamic Knowing” or Knowing- in – action (2004, p.22). According to the gallery literature the works in the exhibition aim to mimic the actions required to produce them.  This process seems to echo what Philosopher Donald Schön calls a pro-active approach: “Research approached now can be much more pro-active involving practitioners researching through creative ‘action’ and ‘reflecting in and on action’.” (Schön, 1983, in Grays and Malins, 2004, p.25) The artists aren’t scared of mistakes and instead they thrive on serendipity and chance and allow the works to live and breathe as animate objects.
Tacit knowledge is made explicit through a reflective practice with a cartography of the processes involved in the creation of the exhibitions works displayed in the foyer. Thinking occurs physically through the materials of latex, clay and spray paint and a sense of urgency or the works being in a state of flux inhabits the freshly curated space with there being seemingly infinite curatorial possibilities for the works. 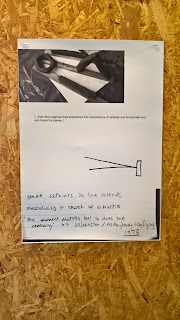 Researchers Grays and Malins refer to the concept of “Meta-thinking” which is thinking about thinking, here both Warner and Morrison seem to be Meta-making, thinking about making through making. This seems derivative of action research (McKernan, 1998, p74 in Malins, 2004), as the artist’s work involves intervention, diagnostics and problem solving in action. Taught latex echoes the tension in the bodily relationships between artist and material with the gloss of the orange spray paint highlighting a deep reflexivity in process and questioning of the position of the self in the process of the works coming into being. 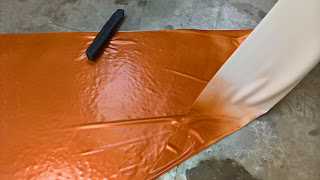 An 8 hour recording of the Warner and Morrison’s working processes plays as a durational work in the stairwell, this audio reconstruction or reprint of the process seems an intriguing means of documenting process and thought in action. Action research is already a key research concept in existence however perhaps this audio recording could be action reflection, with reflection replacing research as a means of developing and learning from data already in existence. 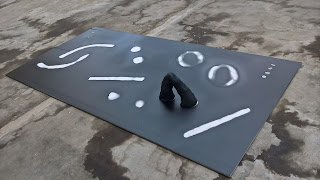 The term ‘material witness’ is cited by Biggs and Karlsson (2012, p.211) in The Routledge Companion to research in the arts  and highlights how knowledge is created through experience with materials. Clay literally holds the index of creation with fingerprints presenting the presence of the artist and create an embodied experience of creation, as a spectator in the exhibition I am witness to the embodiment of the artist in the clay, their process is marked in the index of the fingerprints and by the manipulation of the form of the clay into various shapes. 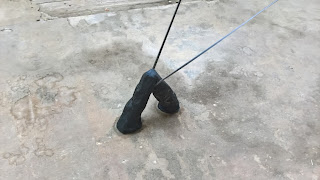 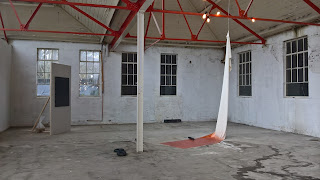