PRINTING ON THE ON EDGE – PRINTMAKING 2.0 // THE MELTED MATRIX


Lately I’ve been feeling edgy about the degree show, I don’t mean anxious, I mean literally thinking about the edge. Allow me to expand; both screens and prints have edges, edges which exist both in the actual and virtual (in a Deleuzian sense). The specifics of the edge are mediated by the media used, for example with an intaglio print such as an etching, the edge is defined by an embossed frame, caused by the edge of the print matrix making an impression on the printed paper. Whereas the screen edge is less easily defined as the edge is becoming increasingly subtle to merge in the case of the iPhone* into the hand to encompass the eyes beholding it.

After reading Liquid Modernity (Bauman, 2000) earlier in the year I’ve been playing with the notion of the liquid print, a print in a constant state of flux. In Liquid Modernity Zygmunt Bauman explores the ‘fluidity’ of contemporary social life through five key issues: emancipation, individuality, time/space, work and community. In short Bauman argues that modern society is in a state of liquefaction as society melts from the continual pursuit of a new order to replace a more ‘solid’ previous order. The solid social structures with the advent of new digital technologies have become liquefied and fluid as the information flow provided by the Internet and other technologies have enhanced mobility and speed of communication.

In order to achieve this liquid state I’ve become drawn to the digital in order to achieve a print that can be both solid and liquid, actual and virtual. It seemed only natural to investigate the creation of a biotic print as working with animate materials would ensure that the print is able to constantly evolve. Voila, Live Art. The use of the body as a site in which to allow space for creation immediately ignited a leap in my print practice. I have always perceived traditional print techniques such as etching to be ritualistic as the print process dances on the boundaries of a ritualistic performance with a print output at the end almost operating as an index of the body melting around the print matrix.

Live Art became the frame and agent in which to allow further experimentation and action research to discover the placement of the body, and self in relation to both the screen and reality. The blurring of the distinction between the hyperreal and real is melted by the print matrix. Baltic Signs is an example of what I have coined a Live Print to offer a fluid exchange between the actual and virtual to explore both virtual and actual forms of embodiment of print, below is a breakdown of the Live Print process: 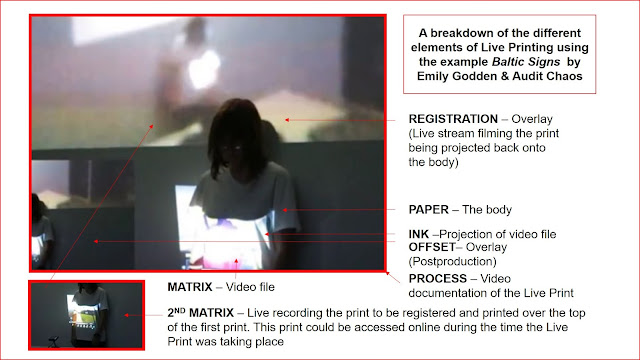 Baltic Signs explores the positioning of the self in relation to the screen and how we have become immersed in a series of layered screens. Our existence has become overlayed and superimposed with different networks which we connect with, the Live Print; Baltic Signs allows the physical presence of the body to reclaimed and pulled back from the absorption of the screen.

In an increasingly digital world more emphasis is being guided towards our electronic footprint and the meta-data we cast away as we surf our way through the seemingly infinite Internet.  Within Live Printing the body replaces the traditional print matrix in which to highlight the absorption of the self into the network. A digital distance is created in performing the Live Print via a live stream, when accessed online the Live Print takes on a new lens to be experienced. Agency is transformed by the screen and engagement is manipulated by our absorption of the pixel. The Live Print is only accessible online when printed/performed live, once printed the live stream is terminated in order to ensure that the Print can only be disseminated live.

“The history of performance art in the twentieth century is the history of a permissive, open-ended medium with endless variables, executed by artists impatient with the limitations of more established art forms, and determined to take their art directly to the public. For this reason its base has always been anarchic.”

Since opening up my print practice to new digital technologies I have felt this frustration dissolve as through my research into Live Art I have been able to expose my print practice directly to the public or in the case of Live Printing to a digital public. I have utilised the material manifestations of print within the virtual through my use of live streaming. The work is printed within the edges of the print matrix which audiences experience the Live Print through, this could be a mobile device, projection, desktop etc.

The use of the body within Live Art creates a machine for desire as the values placed upon the body supersede commerce and material gain that would be present in for example painting. The somatic language arising from the presence of the body in Live Printing focuses attention between the collapse of the actual and virtual. Writer Rob Horning argues that; “With the advent of digital communication technology, the real and the virtual have collapsed into each other. Images now seem like reality itself, the substance of experience, not just representations of it.” (Horning, 2016, p.65) By preventing the Live Print from being documented and only existing as a live act, there is the erasure of the potential of the body becoming an image.

In attempting to research any previous existence or forms of Live Printing I became interested in the body politic. The body is an overarching power within the Live Prints I have undertaken thus far and so I decided to explore other artist’s use of the body as a print matrix. Vito Acconci’s body as a matrix within the series Trademarks (1970) is intriguing, the matrix is a tool for representation, a screen for printing another reality. Vito Acconci (1940-) constructs a corporeal form of printing and describes the process as; “Biting myself: biting as much of my body as I can reach. Applying printers’ ink to the bites: stamping bite prints on various surfaces.” (Acconci, 1972, p.11) The body is objectified to some extent as Acconci seems to attempt to break the wall of flesh embodying the self in a frame, and then contorts the body in order to achieve a print.

When referring to the telematic embrace I’m not alluding to hugging an iPhone, however it is always with some horror that all falls silent when an iPhone hits the floor, as if when our technology deteriorates so do we. When the inevitable splintering of the screen on the iPhone occurs our reflection in its glossy screen is fractured losing both the edge and our recognition of the digital (ideal) self. Within my Live Print I don’t know either (2016) I wanted to highlight how the human heart is a machine in continuous operation until it no longer ceases to function. Its existence is binary – it is on or off. With this in mind our lives have become ruled by binary operations and we are now controlled by the machines we created and we have come a long way from the telematics embrace that Roy Ascott alludes to in the; Telematic Embrace (2003).

Philosopher of Phenomenology, Maurice Merleau-Ponty (1908-1961) raises an intriguing dilemma in the Phenomenology of Perception (1945); “Why is our body for us the mirror of our being…?” (Ponty, 2000, p. 171). The anxiety of the mirror reflection or the reprinted body in an actual reflection is not distorted, unless the body is perceived via the Lacanian mirror. The mirror becomes a source of fear, however we have greater control over our virtual mirror, and therefore screen based mirrors are reflecting the ideal self, distorting our true subject/object relation in the real world.

Within The Ecstasy of Communication (1988) Baudrillard argues that the subject is always close to instant information as we are always in close relation to some sort of information network as the subject; “becomes a pure screen a pure absorption and re-absorption surface of the influent networks” (Baudrillard, 2012, p.30). This suggests that we have become a number, an extension to the binary 0s and 1s and chained to the code we have programmed to serve us. Our bodies are now swimming in an information flow as the screen functions as a hyperreal simulatory mirror not representing our reflection as a standard mirror but acting as a gateway to connect the self within a teleological theatre.

The body is in a sense a truly unknowable object, as we embody the self we remain tangled in a conflict concerning a constant anxiety of not knowing. The screen sets to blow apart the Mind/Body duality René Descartes was obsessed with (Descartes, 1641 in 2008, p.9) as we have become split between self, screen and embodiment as we become increasingly embedded in the digital. Technology has manipulated our perception of time and borrowed our thought to the extent that Artificial Intelligence is invading our everyday. Machines are learning from our imperfections to the extent they now correct us without us knowing. I’ll pause for a moment to allow you to reconcile any awkward autocorrect messages you have received or even sent, because your device thought it was one step ahead of you…

By utilising live streaming services such as USTREAM I have been exploring the very public domain of the Internet by opening up Live Printing to be accessible to more than one audience. The audience becomes both an actual audience and a distant virtual audience courtesy of the Internet which is according to writer Rachel Greene; “Both everyday and exotic, public and private, autonomous and commercial, the internet is a chaotic, diverse and crowded form of contemporary public space.” (Greene, 2004, p.8)
The virtual is the condition for real experience, but it has no identity; identities of the subject and object are products of processes that resolve, integrate, or actualize a differential field. Therefore the virtual is read as the genesis of real experience, with chance being a mechanism to actualize a system to generate work within a process led framework of production. Live Printing exploits the virtual/actual gap where the body limits and physically grounds the self, therefore the virtual opens up a new dimension for the self to exist which is free of physical limitations. The matrix has been melted and its form deterritorialised in order to frame printmaking within our present day obsession with new technologies. Over the coming weeks I hope to further explore Live Printing and hope to reterritorialise print as I build towards my degree show installation; The Experimental Village 2.0 .

*Other smart phones are available