Constructed as part of a residency at Nida Art Colony, Lithuania  in a collaboration with students from Vilnius Academy of Arts, Lithuania, filmed on the 27th September 2015 at Nida Art Colony, Baltic Signs explores the layering and expansion of the  screen.
Combining pre-recorded footage of Nida, Lithuania, Baltic Signs explores Baltic signs including fire, land, wind, sky, moon, star and sun, with a live performance element which was recorded and projected back through a live stream and broadcast live online at the time of recording) to expand the depth of the screen and explore the placement and negotiation of the self within the screen. 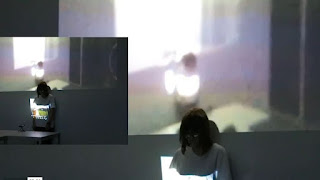