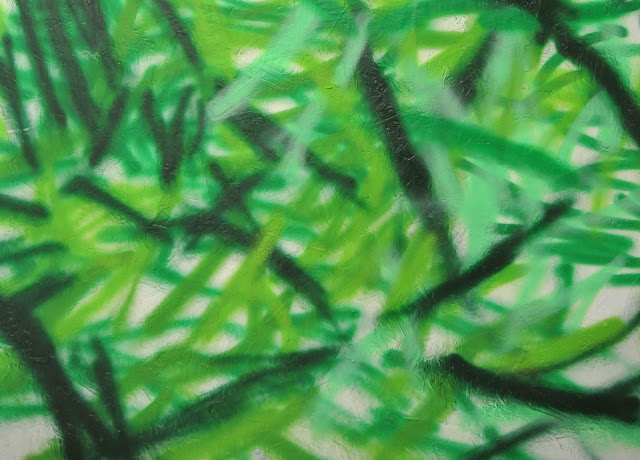 BALTIC SCIENCE
Baltic Science is an installation of print orientated works in progress developed from a residency at Nida Art Colony, Lithuania. The works explore natural data systems and are directly informed by data collected from Nida.


6. Medis dalis trys, 2015, Acrylic spray paint on plywood
Works 1, 5 and 6 are are formed from data collected from trees from across Nida, Lithuania. Printing the information from the Medis paviršiaus matrices using an OHP to project onto the board with light, the marks were then printed onto the OSB and plywood boards using Montana acrylic spray paints.

2. Baltic Signs, 2015, Superimposed video 3 min, 26 sec
Performed amongst a layering of screens, Baltic Signs was constructed in a collaboration with students from Vilnius Academy of Arts, Lithuania, filmed on the 27th September, 2015 at Nida Art Colony.
Combining pre-recorded footage of Nida, Lithuania, Baltic Signs explores Baltic signs including fire, land, wind, sky, moon, star and sun, with a live performance element which was recorded and projected back through a live stream and broadcast live online (at the time of recording) to expand the depth of the screen and explore the placement and negotiation of the self within the screen.

Medis informacija draws upon the surface information of the negative spaces on the surface of twelve sections from twelve trees found across Nida. The drawing prints the information on the ten metre long piece of paper to map out the data to highlight the dominance of trees on the Lithuanian landscape.