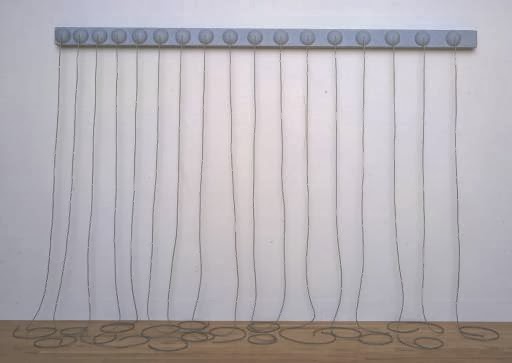 Known mostly for sculptural works, Eva Hesse also worked in painting and drawing, Hesse refused to acknowledge that painting was dead, a notion that was wild in New York in the 60s.

In her days as a student at Yale, one of Hesse’s teachers was none other than Josef Albers, when Hesse created paintings she was unhappy with, she would often rip them apart and assemble them as a collage. Hesse viewed collage as “one idea cancelling those of another”, the mode of collage itself creates a strong sense of tension and disruption, with Hesse’s working processes often evoking the boundaries for meaning.

Hesse’s progression into obsessive lines of development, specifically with her exploration of materials such as latex, Hesse was able to explore the deterioration of materiality and the possibilities offered by irregularity. Often set by critics in a minimalist rhetoric, the visual language of Hesse seems formed by an autonomous existence, spurred by a desire to create as a means of constructing boundaries by drawing in space an admission to absurdity.

There is a strong sense of concentration in Hesse’s geometric forms, within Hesse’s Addendum,  (above), hemispheres are deposited into existence, positioned at intervals determined by a mathematical series to remove artificial emotion, to construct a serial mute response. 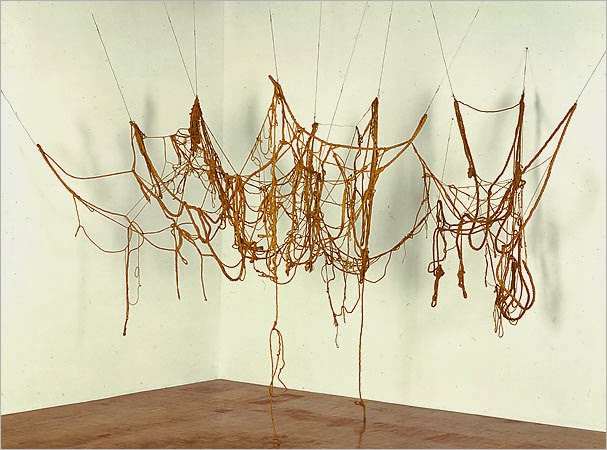 Artists whose work Hesse admired included Marcel Duchamp, whose total absurdity drew parallels to Hesse’s work percolated by contradiction and chaos. In works such as Untitled (Rope piece), Hesse brings about a sense of suspension between states of being , as though Hesse is physically and metaphorically waiting for the latex and thus the pain of existence to set into the realms of reality. It as though Hesse is tracing lines of inquiry into working processes of moments of spontaneous unconscious expressions.

Hesse’s processes evoke a sense of touch and texture as though the texture transposes a piece into existence as layers of latex are painted onto the rope acting as layers of consciousness. The rope acts as a continuous line across a visual field constructing connections in a physical mode of mark making drawing in space. Trapped in reality, tracing lines of enquiry into a suspended reality and existence the viewer enters into suspended states of being waiting, watching for the latex and the reality it is drying into, to set in the shadows of truth. 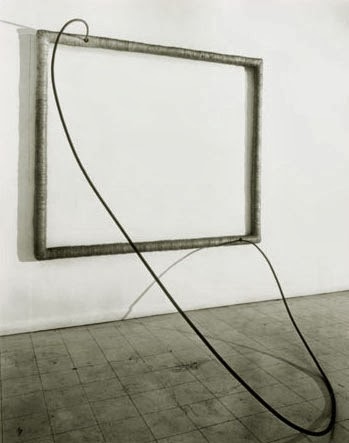