RICHARD SERRA - DRAWINGS FOR THE COURTAULD 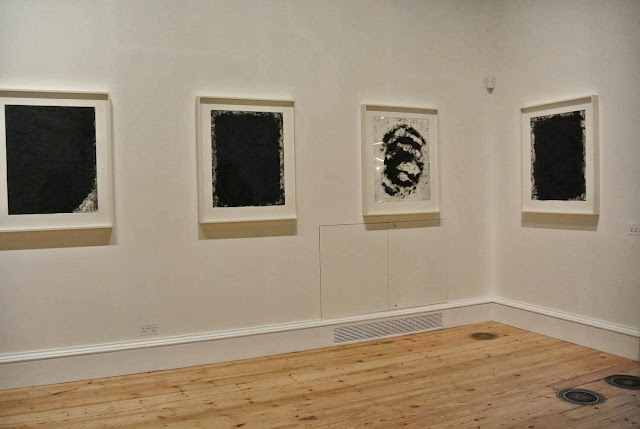 Known largely for steel sculptures that have a presence heightened by an elevated sense of apprehension with unfixed sections that sit quietly balanced against each other, Serra’s drawings seem to encapsulate an anxiety that his sculpture also engages in. Except in the case of the drawings, there is a more intimate and balanced relationship with the viewer, separated from a sense of danger.

There is a certain self-consciousness and engagement with internal realms of meaning. From this the ambitious task of constructing drawings as raw and expressive ideas through the development of an innovative method of mark making, into twelve drawings that stand tantamount to tradition, highlighted for me, the true versatility of the nature of drawing itself.

At the heart of the drawings is a physical battle between drawing as a process against the process of drawing, by this I mean Serra re-vitalises the vision of drawing as a finished work, rather than just a piece of  painter’s preparation or a sculptor’s sketch.

The perceived location of the drawings on the wall spreads into the viewer’s unconscious eyes and embeds itself inside a suffocating blackness that materialises a sense of isolation.  Juxtaposed against the Courtauld’s rich impressionist driven collection the drawings explore the materiality of the process and challenges pre-conceived notions of what drawing can be.

The location of the drawings initially seems odd; however it is no moment of serendipity that the drawings lay in the same gallery that houses a painting heavily admired by Serra. Cézanne’s “Still Life with a Plaster Cupid” C. 1894 highlights the context behind Serra’s interrogation into perspective.