The exhibition is the result of Michael Landy’s three year residence as the eighth Rootstein Hopkins Associate Artist of the National Gallery. Upon waiting for entry you are able to view a towering St Appollina extracting her own teeth with pliers that knock against her face, which is gradually deteriorating against the repetition of the tortuous act.  Once armed with an orange token to allow entry you are surrounded by the National Gallery’s Saints reimagined and re-incarnated into seven kinetic sculptures.

Landy seems initially a slightly strange choice to respond to the gallery which he admits to never visiting as a student. With the state of art constantly evolving and changing and a funding fiasco brewing, the National Gallery took a risk with Landy. However with great risk comes great reward, and after a settling in period of pure observation, Landy began by acknowledging he would “never be good enough” and seemed concerned that “this project could only end in failure”. (Landy)

Landy seemed to be working in a pressure cooker fuelled by critics waiting to add doubt to add fuel to the fire of his own destruction. Nevertheless it is in destruction that Landy pursued forming a response to the collection that explored the attributes and symbols of the Saints that are falling foul of an increasingly secular society.

Through a process of copying selected works from the collection Landy was able to digest his early responses through drawing. Landy’s own energy transcends into his work that stands looming over the heads of viewers in a conversation where the viewer is asked to begin. The idiosyncratic nature of Landy’s previous work such as the series, Portraits, 2007-8 is highlighted in Landys initial responses the collection, which is perhaps best illustrated in Cézanne’s Bathers as Rubbish Bins, 2011 where each of the bins represents a figure from Cézanne’s, Bathers, 1894-1905.

Cast in fibreglass the sculptures are set against the silent shuffle of the politely intrigued with the odd viewer daring to press the foot pedal or red button that triggers the sculptures into artificial life. This connection and reliance upon activation by the audience brings about the powerful message of existence that transcends all seven sculptures. The inherent iconography of Landy’s work is pre-configured by the allegorical nature of the National Gallery’s entire collection. 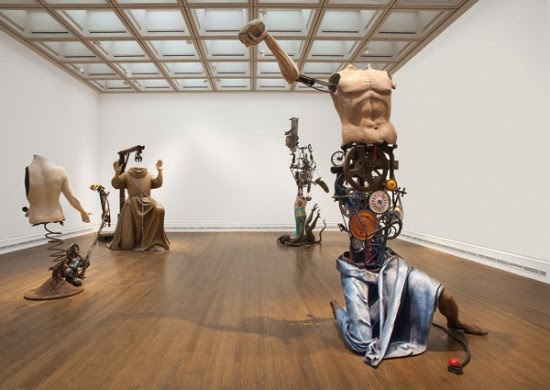 Landy turned the wheels of time and resulted in turning the wheels of fresh connections constructed by taking fragments of paintings out of complete compositions and into mechanical and modern minded martyrdom. The notion “ destruction can also be a creative art” (Landy) is cemented in the separation of forms from two dimensions and into three. By constructing kinetic sculptures influenced by Jean Tinguely, Landy is potentially pushing open doors that close off young minds to the dusty masterpieces of western art.

Underlying the noise and energy of the movement and reactions to the physicality of the sculptures seems to be a theme of isolation, and dis-engagement. Could Landy be on a pursuit of discovery? Perhaps, however Landy has constructed work through a process of recycling ecclesiastical and iconoclastic motif. Set against the juxtaposition of the anatomical and the mechanical, Landy discloses a subtle and suppressed anxiety of existence.

Imbued with a playful nature the inherently allegorical work of the collection has suffused itself into the essence of Landy’s work from the religious Renaissance paintings surrounding the Sunley room.  Audiences are invited to spin the Saint Catherine Wheel and Win the Crown of Martyrdom.  With each spin a section of narrative of one of the saints in the collection is revealed, apparently I will have a mystic marriage to a Christ child. - intriguing.